Blowing on the Coals 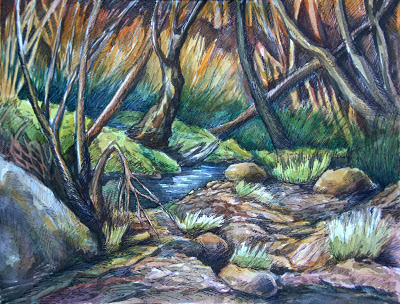 Coming back to a painting that's gone cold is like coming back to a plate of food after a long unexpected but important phone call has interrupted your dinner. The enthusiasm when you first sat down is lost when you return to the once appealing, now congealing meal.


Nonetheless, one has to give it the old college try—especially when you have a promising start on a piece. It's always fun to start a painting, but when time is short and you are dealing with the distractions that come with plein-air painting (like bugs, wind, and darkness), you are sometimes forced to set a piece aside before it's well established. That’s what happened here. It was cool, windy, and the sun was going down—so it was getting colder. I had to call it quits because I was shivering and my bottom was getting numb from sitting on the damp soil.

This piece was beyond cold. It was a dry, shrunken crust on the creative dinner plate. I won’t even show you the before painting, because it is so different from the result. The piece started out loose and filled with rich, warm colors. It became cooler upon my return to it—literally and figuratively. I found myself reaching back through thick cobwebs to remember the color and the value that I had not quite captured. I tried to put myself back into the mood of the place and recapture what first inspired me to sit in that spot beneath the willows at Lone Pine Creek.

I’m not sure that this painting will make the final cut, but I thought I would share it anyway. A little view behind the curtain at one of the pieces I’m not sure I would call a success. I’ll put it away and look at it again in a month or two, though it may end up in the collage pile. We’ll see.

I hope this does not portend another dry spell, because I’ve plenty of inspiring photos to work from after our recent trips. I guess I’m not sure what I want to do next. I’ll just have to head up to the studio and see where my art takes me next.

Posted by Artology Now at 5:27 PM No comments: 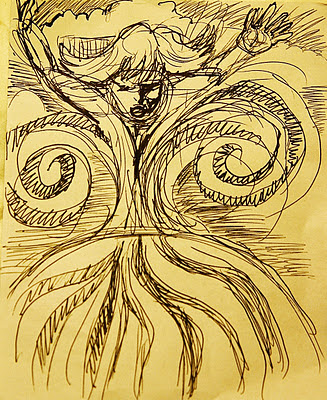 When I first saw the bands of color the old ones would watch from their hilltop, I felt it in my center, a vibration of excitement just below my breastbone. I felt this was a place of important beginnings.

The landscape rolling by was a handful of sticks from my favorite box of pastels. Dusty and crisp and brilliant: red earth, dotted with velvet junipers anchored by inky shadows, glowing sage, and sun-bleached yellow grasses, lighting the rolling hills spattered with lava and sandstone. So much more than any photo or painting could ever say.

We came to the place where the old ones lived and prayed. Stone terraces where they watched the light change on the mesas and wondered if there would be enough food for the winter. Would there be enough rain?

Only whispers of their spirits remained, though. All but a trace had been wiped away by the “new ones” in microfiber, pushing strollers, while dragging children who cried for sodas. Some of the essence had been erased by the government, who re-mortared the rocks to “mitigate liability”, thereby sterilizing the experience to make it safe for the masses.

Near the quiet end of what should have been earth, but was an asphalt skin, we escaped the new ones who didn’t want to stray too far from the parking area. It was there we found the crack in the earth. It was there, that I smelled my mother and felt her breath blow blissfully in my face.

That’s the science, but for me, it was a deep, spiritual experience. I felt my mother. I smelled her. I felt her life force, her energy, her love. Not the woman that carried me into this world, but my mother, the earth. The mother I cling to that nourishes me and keeps me grounded.
Posted by Artology Now at 8:35 PM 1 comment:

Email ThisBlogThis!Share to TwitterShare to FacebookShare to Pinterest
Labels: On the road
Location: Durango, CO 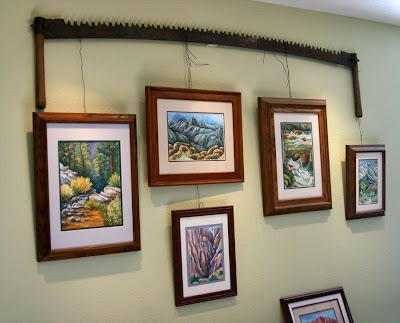 Posted by Artology Now at 1:50 PM No comments:

A Quick Message from My Evil Twin 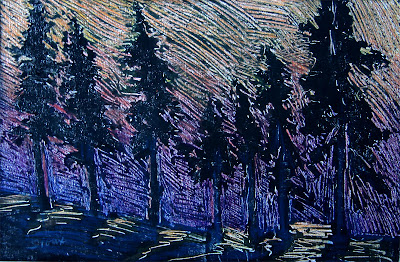 We are less than two days away from the show and my evil twin is here cursing and whining and growling as we prepare. This behavior will take place right up until the first guest arrives, when she (the evil one, not the guest) will magically melt away, and the sweet and pleasant me once again takes control. Because then, it’s all gravy, baby. I drink champagne, visit with long lost friends, and get to know new ones. We have fun and if I’m lucky, a few people buy my paintings.

In the meantime, in my never-ending search to overdo it and tendency to freak out about wanting everything to be perfect, I drive myself and everyone around me (Clint) a little crazy. In the end, it all turns out fine (I just keep telling myself that).

This week I had only a nanosecond of art time. Remember the Domeland Wilderness? This is one of the monoprints I did when I first returned, filled with memory and spirit of the burnt, silvery, and twisted Diva trees that watch over the Domeland.

The color was inspired by the heart-tickling sunset we witnessed the second night we were there. That day, as we hiked down from Church Dome, in the distance, bruised clouds dumped rain in a ring around us.

When we returned to camp and started dinner, the sun disappeared and we had a spattering of rain—nothing more. As the sun dropped, peeking between the cloud layer and the horizon, the world filled with orange and violet light. Occasional flickers of lightning backlit the trees.

We rushed out to the open meadow to watch the show. Then, the clouds shifted and a lavender rain shower veiled the sun, which still cast its brilliant color further west where the clouds had cleared. We watched the light and color show until dark and tramped back to camp to sit by the fire—until the moon rose (that’s another story).

It had to be one of my top ten best ever sunsets.
Posted by Artology Now at 6:24 PM 2 comments: