When pieces are in the Not Quite Ready for Sharing category, they sit in the living room where we can walk by them a throughout the day and evening. They are also positioned so that when I work out, I can study them. It's a little like letting the turkey rest when you take it out of the oven, except that you can put the painting back into the oven, so to speak, if it's not quite done.
Sometimes, after a few days, a glaringly obvious problem will appear. If that doesn't happen, I'll turn the piece upside down to see if I missed anything. At some point, the piece returns to the studio for rework or a coat of varnish. 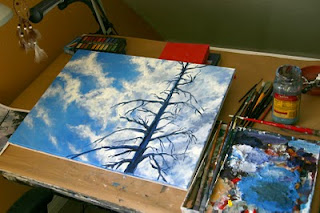 This is one of the pieces I brought down from the studio. What you don't see in this earlier version is the addition of a hawk. The hawk is critical to this painting and it took quite a bit of the time to add it. It could be the crowning touch or the reason I cover the painting over with whatever is left on my palette to begin again. Adding elements like the hawk can destroy a painting, taking it from a wonderful expression to a smaltzy piece of crap—like adding the teardrop to the kitten with the big eyes (not that there is any hope of wonderful expression in that example).
So, it sits and we debate, "Does the hawk work or does it look stupid?" The consensus this morning is that it works, but needs a minor tweak or two. I need to think about how I'm going to tackle that for a few days though. 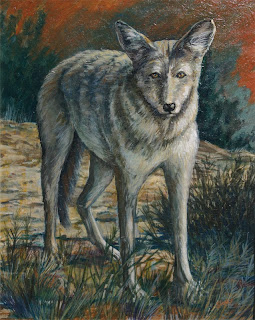 Trickster spent many days, two or three times in the Viewing Area. I looked and looked at this painting. This fellow did not want me to capture his likeness. I struggled and repainted parts of him several times. It's funny that I did not give up and wipe him away. I guess I wanted to beat the trickster and show him that I could capture his likeness. He now lives with our friend Bob, so he's not too far away.
Have you ever struggled with something long after you would have normally given up? What do you think prompted you to go on?
Posted by Artology Now at 9:31 PM No comments: 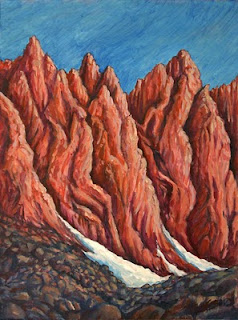 This is one of the more iconic views from the trip: the needles to the south of Mt. Whitney as seen from Trail Camp. We spent two nights at Trail Camp, which sits at an elevation of about 12,000 feet. It is as barren as the face of the moon and has a stark beauty about it that will stay with me always.
The sun rising on the needles is an amazing symphony of color. Even before the sun peeks up over the horizon, there is a warm, coral alpenglow. Then, as the light gets stronger, the color heats up to a fiery orange. When the sun is fully in the sky, the bright spires become the color of bleached bones that have lain in the sun for a million years.
Have you ever been somewhere that you know will remain etched in your memory forever? Where was it? Why were you there?
This painting is acrylic on canvas. It is 18" X 24".
Posted by Artology Now at 7:13 PM No comments: 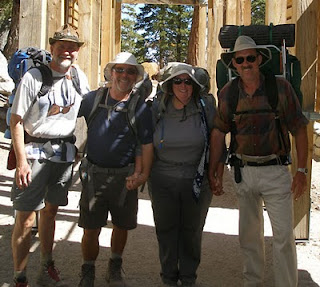 This is going to be an interesting art year. I've already completed two pieces with another three in the works. And hey, it's not even the end of January! This year is going to be all about Mt. Whitney.

For the three people I haven't told, in September of 2010, I climbed Mt. Whitney with my sweet husband and two other dear friends. It was a big deal. I want to keep it fresh in my mind for the rest of my life. So I'm doing that in two ways: writing about it and painting about it. You'll get both those things here. The stories and the art the trip inspired.
Posted by Artology Now at 6:54 PM No comments:

Welcome to my art place 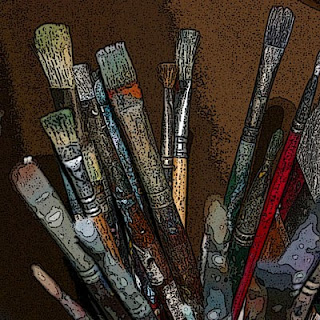 I have finally overcome the procrastination beast and created a place to share my artwork. So, for all of you who have been asking to see my work, here it is.
I'll share a few favorites—some that have found new homes—some that have not—along with my ongoing painting journey, so you can see new pieces as I complete them. You'll find out a little about how each painting was inspired and how it came to be. And, there may be some general ramblings on art.
There's a side benefit to this activity: my work will be photographed on a regular basis. I'll bet there are a hundred paintings I've finished, sold, and never seen again. Occasionally, I'll visit someone and see a painting that I've completely forgotten I ever painted.
Hmm. I did that? That's a pretty good painting. Too bad I don't have my camera with me...
If you live too far away to come to my annual show, you'll finally get to see my work. If you live close, you'll get a pre-show preview. And, if you've never come to my show, (yeah, sure she's an artist), maybe this will get you here for the next one in November.
Stay tuned,
Susan
Posted by Artology Now at 6:34 PM 1 comment: