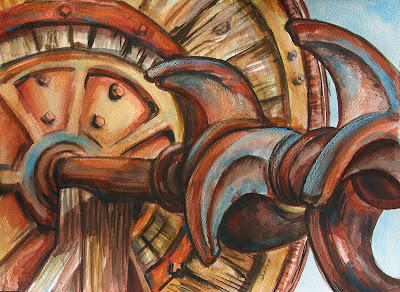 Long after I'm gone and all my paintings have been disbursed through thrift stores and garage sales, I’d like to think that someone might have kept a piece or two from my Rust Period. Yes, Picasso had his blue period and I, rust. You see, lately I've been obsessed with the rainbow patina of rusty relics rescued by desert rats.


Out at Goffs, where the old school house still stands, a band of RV-snowbirds and members of the Mojave Desert Heritage & Cultural Association volunteer their time add to or fix up the growing display of desert detritus arranged outside the museum. It has evolved from a run down building to a full-on compound with rows of cool rescued buildings, equipment, coffee pots, sewing machines and other signs of life left behind in the Mohave.

The gates were locked when we arrived one Saturday morning to check out this interesting collection of castoffs. We studied a glass case filled with sun-bleached flyers, one of which told us the gates should have been open. We called the number "to make an appointment."

"What?! They haven’t opened the gates yet?" squawked the woman who answered the phone. "I’ll send someone right out."

Less than a minute later four golf carts (Goffs’ carts?) manned with extremely serious senior citizens roared up, dust tails spreading out behind them (the carts, not the seniors). It took pretty near all of them to open the gate, requiring so much of their attention, not one of them responded to our "good mornings" until their mission was accomplished.

As we wandered through the rows, we came across a stamp mill that had been rebuilt by the volunteers. They fire it up every so often and it makes a tremendous noise, the docent told us. The talented volunteers are piecing together an even larger one they hope to have finished this year. By the looks of the chunks of metal lying about, it’s going to be a monster. We'll definitely go back to see it in action—I want to feel the ground shake as it stomps on ore-laden rocks.

The piece you see at the top of this post is a mix of three media. First, I laid out a foundation of values with sepia ink. Then, I added color with watercolor, and finished it off with Prismacolor pencil. I like the texture of the pencil on the watercolor paper; it works well to recreate the bloom of rust on the metal.