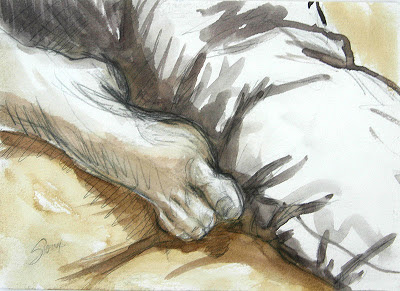 * By the way, these neighbors have been huge supporters of my art, having purchased several pieces. Thanks, Neighbors!
Posted by Artology Now at 7:03 PM No comments: 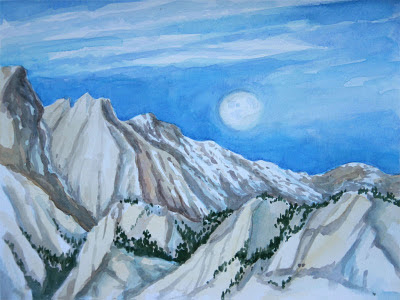 When we returned to Lone Pine, the gods smiled down on us with a near full moon, just starting to wane. We’ve had wonderful moon karma on our trips, and this trip was no exception.

Just as we settled into our sleeping bags, after inhaling a meal of fresh grilled trout and enjoying a spell of spectacular star watching, the moon rose magically in the exact center of the window of our tent. It was as though the cosmos had led us to pitch our tent in the perfect spot to frame the moon.

Once a few years ago, a similar event happened when we were camped at Valley of Fire in Nevada. An enormous golden moon rose from the perfect center of a prominent notch in the rocks that surrounded the bowl where we were camped. It was astounding and beautiful. And although the moon had risen from that notch many times throughout time, we were lucky enough to be there that very night to see it happen.

The next morning in Lone Pine, high thin clouds gave us an all day show as the wind pushed and pulled them into interesting shapes. It made the light soft and gentled the heat of the sun. As the moon made its way across the sky, just before it dropped behind the ridge I quickly broke out my watercolors and did this painting.

It was a divine trip.
Posted by Artology Now at 6:23 PM No comments:

Email ThisBlogThis!Share to TwitterShare to FacebookShare to Pinterest
Labels: Not Whitney, plein air 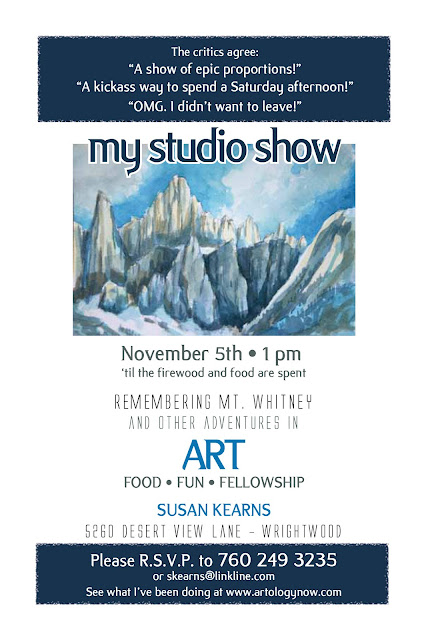 My annual show* is screaming towards me like a bunch of crazy women running for the doors at a 3 am Black Thursday sale.

I have to start killing off the dust bunnies and get the framing finished, both of which have taken over the dining room. Once the art is framed and the house is clean, it’s time for the most difficult part of preparing for a show: the dreaded hanging. Yes, we’re still talking about art. I know Clint dreads it every year.

All the paintings, drawings, and prints are lined up against the walls so we know what we have to work with. Then the debate begins. Where to hang what; trial and error, moving and re-hanging. Will these frames go together? Are the colors compatible? Which wall color looks best behind the piece? Does the piece have glass and reflect too much light? It’s a complicated process. It all has to go together, create a flow, and look absolutely, positively perfect.

The good news is I get to procrastinate a little bit longer due to a well-needed, long-awaited camping trip. And we don’t have to weigh anything. No mini art kit this trip; and I’m bringing an entire bottle of wine, too. The car is carrying it. Best of all, I can take my big ole art bag with every set of watercolors and every pad of paper I own. Oh happy day—another plein-air-a-palooza.

Until next week,
Susan

* Email me if you need directions at skearns@linkline.com.

We are back from the Domeland Wilderness and what a wild wilderness it was indeed. We had four glorious days in this rugged, battered, and beautiful wild place. I have so many paintings to come and impressions to share—where do I begin?

We camped next to a meadow gone gold with the coming of winter. It was surrounded by a forest of trees; trees that told amazing stories of hardship and survival. 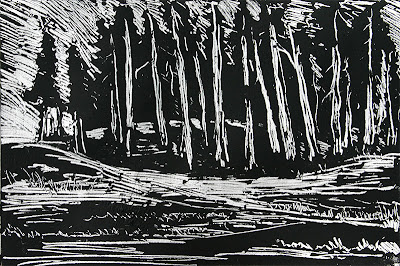 Along the south edge of the meadow stood a patch of tall skeletons left behind by a devastating fire that came through 10 years ago. Bones etched with char, standing as eerie fence posts against a dark backdrop of trees that escaped burning, these trees, the ghosts and the living, are the remains of a dense forest once choked with undergrowth, the ground blanketed in a century of decaying duff.

Survivors reach up to a sharp blue sky. The bases of the trunks, charred, the dark crevices outlining the puzzle pieces of bark. Cartoon trees. Stretching upward, the lower limbs gone, burnt away, the needled branches high over our heads. They are funhouse trees, pulled upward like taffy in one of those mirrors that squeeze you into a long narrow shape arching your mirror body over the real one. Peering down at you, creaking as the wind makes them sway. They've struggled. Determined, they survive.

They’ve stood and watched while brothers and sisters succumb to fire, or snap off when heavy with snow. A swath of those winter casualties is nearby—jagged stumps surrounded by shattered pieces of branches, the needles long gone, dissolved into soil.

Can you imagine the sound of a hundred trees—maybe all at once—as a gust came through and tore them apart, the crown and branches crashing down into the snow in a tangle of ice and mist and needles and cones? Snow spurred into the air, then carried along in a cloud trailing the burst of wind.

Did the birds know to get out in time? Did they know their home was about to blow apart? Were the wood rats nestled in the holes under the snow shaken apart? Frightened to death? Or, did they instinctively seek out homes in trees sheltered from the winter winds? 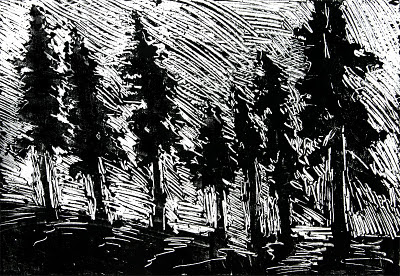 Each winter, the wind and snow take down their share of trees. Some, though green and healthy, haven't sunk their roots deep enough to hold on against the elements. Others, long dead, the heart and roots eaten away by grubs and bugs and tiny things we can't see, finally give in to the forces conspiring to drive them to the ground.

Yet right next to a casualty, there stands a withered skeleton with a twisted and delicate shard at the top offered to the sky; a tenuous, yet defiant fist against the elements.

What I would give to see one of these giants fall! The day it gives up and gives in to becoming earth, its ghostly branches shattering against the ground, splinters clattering against those who still stand. Dirt and duff spinning upward with the root ball, the bark crust crumbling away upon impact.

And then silence for a while. Everything settles and starts to breathe again. A tentative caw from a raven, and then the forest resumes its rhythm and hum.
Posted by Artology Now at 2:10 PM No comments: