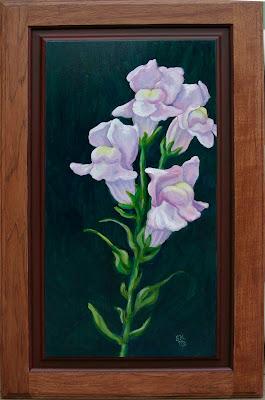 Acrylic on a reclaimed cabinet door

For nearly three seasons, the anti-deer apparatus set up around our back patio worked. However, in September a hungry doe preparing for winter, figured out a way around the fencing and the reflective tape. It took us a couple of nights to figure it out—thinking it might be a rabbit or raccoon. But no—a damn deer had found her way into our buffet of goodness.

In about a week, she’d eaten nearly everything. The ripening tomatoes, peppers, and squash we lovingly covered to protect through the usual two to three night September frost, which, every year tests gardening acumen across southwest Colorado. Those survivors had a good month to continue growing and ripening, but alas, instead they filled the doe’s belly.

I think what upset me the most was that she ate all my flowers too, which usually provide a spectacular show up until the October frost comes along. The calendula, the cosmos, the sweet peas—nipped off, stems held high with nothing at the tips where the flowers once were. After everything was gone, when a flower opened up, she would come back and chomp it off too. The only thing left was one snapdragon and a lavender plant I’d nursed from seed (which she later ate). I snipped a stalk from the snapdragon and brought it into the studio to paint as I lamented our lost fall flowers.

I painted this piece on an old cabinet door (upcycling!) which double-duties as a framed painting, thanks to the outside molding. This door is from a new batch I found at a yard sale. They are heavier, less rustic, and have a more complex profile, lending a more elegant result.

Posted by Artology Now at 2:09 PM No comments: