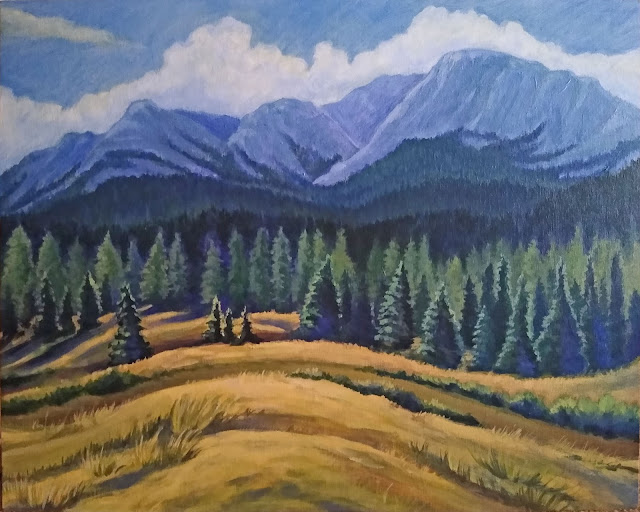 Last summer we hiked a ways up the trail above Andrews Lake, which has a name that escapes me now. The first mile or so is steep, though mostly shaded, and the trail pops you out on a broad, open area where you’re treated to 360º views. There are a few sitting-height rocks that are perfect for a rest and to take in the scenery. It’s really spectacular and worth the slog up the hill.

From here, the trail descends and passes a couple of beautiful ponds and then continues to do what most trails seem to do: go up and down and up and down.

Aside from the incredible views, one of my most favorite things along the trail is a small pine growing out of a crack in a large rock. It’s on a section that winds down yet another hill. I think that little tree is your reward for hiking back up that hill on the way out. I remember huffing and puffing and pausing there, saying, “Wait, I want to look at this cute tree again,” while I caught my breath.

It was a beautiful day and the cool air of the high country gave us welcome relief from the summer’s heat. As we traveled through this area on our return, once the trail started down that last steep hill, the late afternoon’s heat rose to meet us once again.

This is one of those pieces I struggled with a bit...repainting one section several times, but in the end, it worked out, I think.

P.S. Apologies for the bad photo. This painting is better "in person"!

Posted by Artology Now at 5:08 PM No comments: 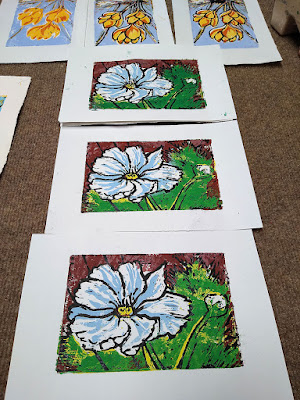 While you haven’t heard from me in a while, plenty has been going on in the studio. I moved on to experiment with other techniques for multicolor relief prints. I have to say, this has taken a lot of time and produced what feels like minimal results. However, it’s been an interesting learning process.

In my next effort, I used an extractive method, where the plate material is carved away with each successive color. In the end, most of the raised surface that would carry ink has been removed, and the original image is gone. Sadly, the results weren’t worth sharing.

Next, I tried a completely different method that uses a separate plate for each color. You start with a main “keyline” image, which you then transfer to tissue paper and then transfer again to the other plates.

The first series is of a white cosmos from last summer’s garden. It was carved into blocks of cherry wood. That was much easier than the plywood I used for the extractive experiment, however it still took several hours to carve the blocks. You can see I used a plate for multiple colors through selective inking. 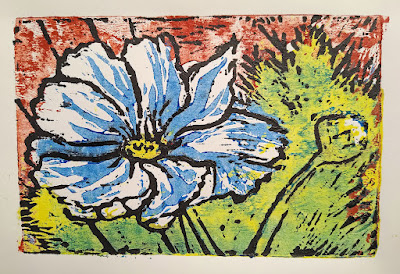 I experimented using both acrylic and oil paint on a lighter weight paper. The ink didn’t cover as well as I wanted, so with the next round, I used a better paper that was dampened and used oil paint. You can see the coverage is much more dense. 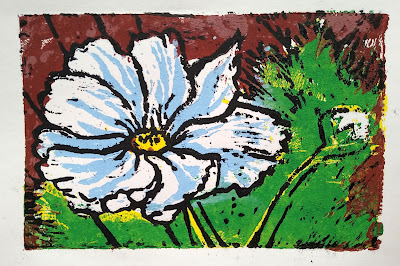 My next series was based on golden crocus planted last fall that rewarded us with glowing blossoms in early spring. I tried a new plate material made of rubber: much easier to carve—but somehow not as satisfying to work with as wood. 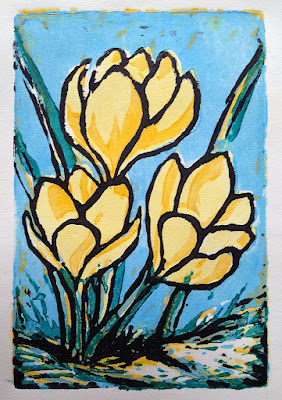 I created two sets of prints using acrylic paint, which is sooo much easier to clean up than oil. Using dampened paper gave me the coverage I wanted. With this round, I used a systematic approach to register the plates using guides to maintain a consistent position. That didn’t work as well as eyeballing it and carefully laying the plate onto the paper. I’m pretty sure that was operator error. 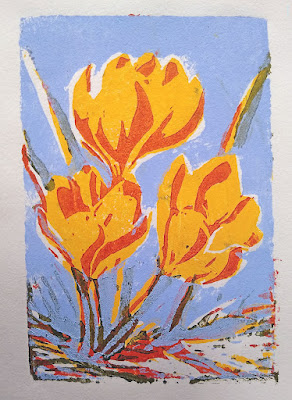 I have so much to learn and a lot more experimenting to do, but after all these variations, I needed more immediate satisfaction, so I returned to a painting I’d started before my printmaking frenzy.

Posted by Artology Now at 12:44 PM No comments: