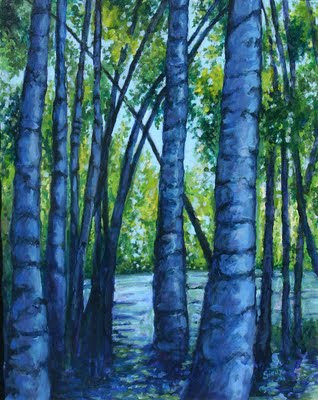 In the Woods
18" X 24"
From an especially prolific period last year.
I know it has been a while since you’ve heard from me, but fear not, my art will go on. You see I’ve had a bit of a dry spell and current events in our life have kept me from the studio. The time and the desire to create have not intersected lately. But that’s OK. Over the years, I’ve learned to take this in stride and not panic when I’m at the lull in an art cycle.
As in all things, creativity is cyclical too. It’s much like the seasonal transition of a year, only more compressed. Green buds of ideas swell as in spring, unfolding to a luscious summer of expression, then the creative flow mellows and slows, then withdraws into a winter-like dormancy.
I find it is best to relax and not stress when I have these dry spells. Being an over achiever, this lack of productivity makes me twitch a little, however I've learned to recognize that when I start to struggle with my art, if I let it rest, I'm rewarded with a juicy burst of creative flow when the spell is over.
How do I know the dry spell is nearing an end? What tells me I'm ready to make art again? I begin to notice my perception is heightened and the way I look at everything changes. It’s a little bit magical and sensual too.
I start seeing the world around me as though it were a subject for a painting. I get lost in detail; find myself deeply studying the shape of objects—the shadows and the highlights. I mentally mix colors to match the pasta sauce I'm cooking, the towel I'm folding.
I compare color temperature, the warms against the cools. I pull on a sock and ponder how I would render the texture of it. Would I use a dry brush? The blankets on the beds are mountains covered in soft grass; dappled sunlight comes alive as shattered layers of transparent color.
Saturated; the feeling becomes liquid inside me. The urge to create begins as a wind ripple on the water, growing into a wave that pushes into peak curling in upon itself, building power and energy. I return to the studio and the wave of create releases and spreads across the chosen surface as though it were a long white shore, casting off a mist in its urgency, and leaving behind a million bubbles as the energy is released.
I know, it sounds a little sexual. In a way it is. When it happens, it’s not just one wave. It’s a series of waves as the flow of creativity continues and grows. The art flows easy and often.
Really, it’s more like the tide coming in. There is a flurry of activity as two or four, or sometimes more paintings are created before the tide begins to ebb. Then the art making begins to wane. The sand dries and waits patiently for the next wave that signals the return of the tide.
I have a canvas on the easel with the next painting already drawn, quietly awaiting my return. It’s a long weekend and a good time to let the tide come in.
Posted by Artology Now at 8:43 PM No comments: 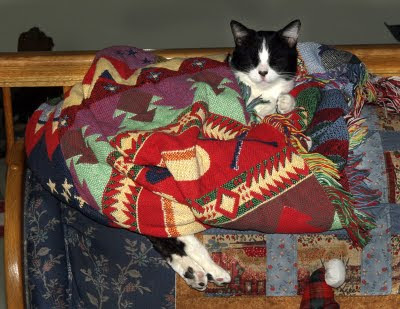 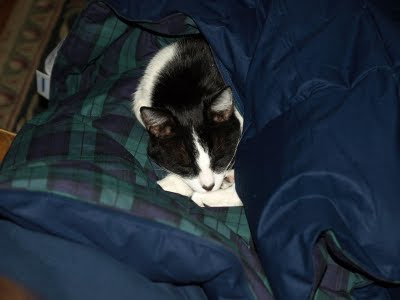 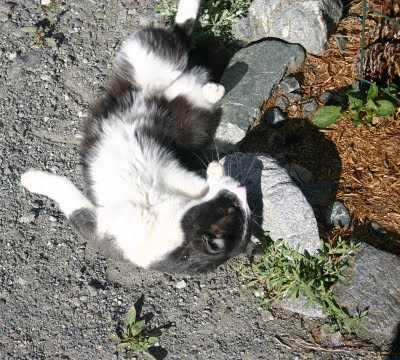 Often he'd come into our office covered in dust and plant matter. He'd jump up on one of our desks, leaving dirty paw prints in his wake and purr as if to say, "Come on outside, it's an awesome day!" He was so happy when summer finally came after long winters spent dreaming of chipmunks and lizards.
Birl loved hard, played hard, and fought hard. But it was a big-ass coyote that caught him off guard before dawn this morning and he took our Birl away from us.
What will we do without our Birl? Who will snuggle up to the other side of Clint to keep him warm on cold nights? Who will lay in our laps with a healing purr when we are sick or sad? Oh my, we miss you so much Birly. May your spirit come home to us soon.
Posted by Artology Now at 7:34 PM 1 comment:

As my first gelatin plate was starting to disintegrate, I decided to try a print using natural materials. One of the interesting (and fun!) aspects of gelatin printmaking is that it lends itself to the use of all kinds of materials (the flatter, the better) to incorporate shapes and textures into pieces. The fluidity of the paint and the soft surface of the gelatin allow the capture of a thrilling amount of detail (yes, my world is small).
First, I painted the plate and laid the leaves and sprigs of lavender on top. The resulting print left open silhouettes where the materials blocked the transfer of the paint. I removed the leaves and reprinted. The impression the objects left in the paint during the first round was then transferred to the paper. Although I missed my registration, I liked the texture and detail it added.
Next, I overprinted the darker colors. I used a brayer to spread an even coat of color onto the plate. This method creates a different texture than when the paint is brushed onto the plate. 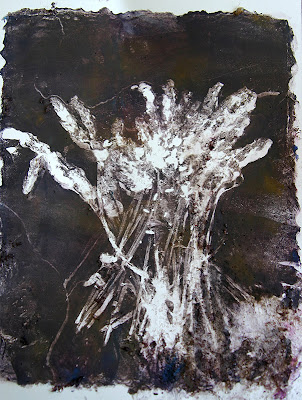 For the last print, I tried a small bundle of lavender, which in its bulkiness completed the destruction of the plate. I wouldn't exactly call it a success, but it's definitely a contribution to the learning process.
And, I’ve learned a lot. The second gelatin plate tore in to pieces after only two prints. Large dry areas on the plate tend to stick to the receiving paper (whoops). I have also discovered my gelatin to water ratio was incorrect. Math. Grrrr.
However, I am not discouraged. Sweet husband is going to cut me another piece of Plexiglas so I can set up two plates at a time to extend the creative frenzy (oh goody!). I can’t wait.
Posted by Artology Now at 8:29 AM No comments: