A Tah-Dah and The Next Big Thing

This past Sunday marked the 1-year anniversary of this blog. Yay. Wow. It’s been a year. I hope you have enjoyed my art and stories as much as I’ve enjoyed sharing them. Thank you to everyone who encouraged me. And thanks to Clint who patiently waited for dinner while I obsessively “got my post up” for the week (well, most weeks).

Well, this year, in addition to ongoing adventures in art, I want to set up a link to a storefront where you can buy prints of my work online. Yikes. It’s in writing now, so I guess I have to follow through on this. This step is easier said than done. Starting the blog was a piece of cake. It’s far easier to blather on about art than it is to set up a shopping cart and the logistics of my offering.

In fact, I had intended to make put this post up on Sunday, but I ended up spending the entire afternoon trying to figure out the new archival-ink printer. It’s one of those helpful models that makes printing “EZ”, but the reality—it’s darn near impossible to print something outside of the pre-sets. Maybe if they spelled easy correctly that wouldn’t be the case. I’m always a little leery of things that claim to be EZ. Despite that, I’m making progress. So, untangling the process of getting prints up online is what I’ll be working on in between paintings.

Here’s where you can help.

Tell me which pieces you like best. Not everyone has the same taste, but there will be some pieces that are more popular than others. I’d hate to waste that expensive paper on something no one likes. Choose as many as you like (oh please say you like at least one) to help point me in the right reproductive direction. Feel free to tell me your choices by making a comment on the blog, sending me an e-mail, or shooting an arrow into the front door with a message tied to it, whatever works for you.

Thanks! Now back to that painting of the sycamore I started…

Posted by Artology Now at 6:49 PM No comments:

Sunrise on the Meadow 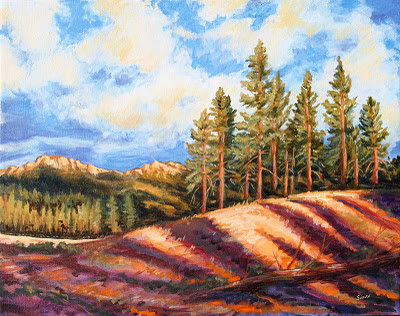 Just before dawn, we woke to the yips and snarls of the coyotes. We tried to go back to sleep, but it was no use. The sky was beginning to lighten, so we shuffled into our jeans and crawled out of the tent.

Mmmm. Tea around the morning fire, waiting for the next batch of water to boil to bring our breakfasts alive. Our campsite sat in a bowl shadowed by a ridge of rock. It took a long time for the sun to peek over the edge of the Domeland.

And when it did, the world went from cool blues and greens and grays to a riot of color. Gold light streaming through the breaks in the clouds first lit the tips of the trees guarding the meadow and then the far ridge tops. The liquid light slid down as the sun slid up, igniting the day.
Posted by Artology Now at 6:21 PM No comments:

Email ThisBlogThis!Share to TwitterShare to FacebookShare to Pinterest
Labels: Domeland 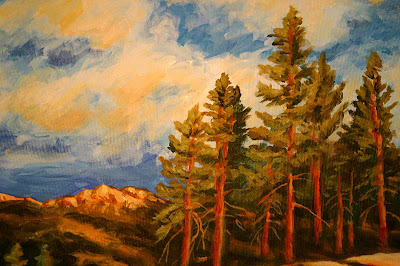 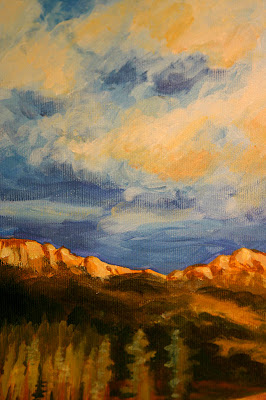 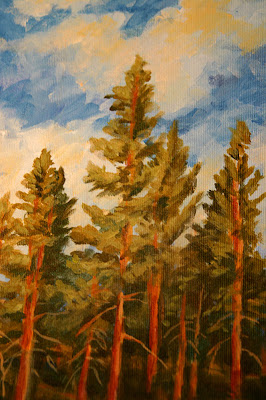 PS. This is my fiftieth blog post. Yay me.
Posted by Artology Now at 6:11 PM No comments: 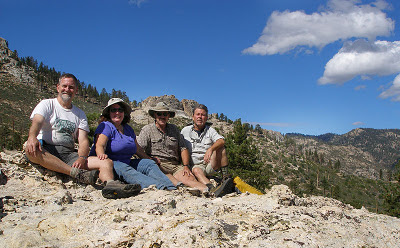 It’s time to go back to Domeland. The wilderness area no one’s heard of tucked between places that sound vaguely familiar. I have to dig deep to recall exactly where it is...somewhere near Brigadoon, I think.

What I do remember is its beauty and wildness—and the fun we had—the four amigos. I still laugh remembering as one of our hiking party—who shall remain nameless—high stepped like a cartoon character, legs-a-spinning as he hightailed it down the trail away from a very pissed off rattlesnake who’s sunning was disturbed. Funny? Yes, if you weren’t the one running. 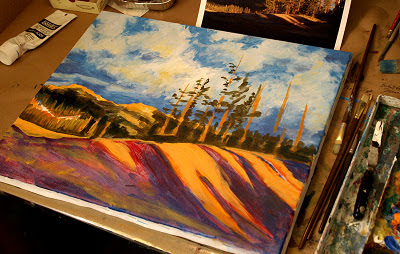 Domeland feels like a secret place where somehow you’ve been lucky enough to gain entrance. You can hear yourself breathe there and feel the spirit of the place—its trees, rocks, and wildlife.

From a painter's perspective, the Domeland is a Maxfield Parrish painting. It’s saturated and oozing and dripping with color and contrast.

So, what to paint next? I had one more of those special canvases I fell in love with and an image of the sun first lighting the meadow—the perfect subject. I broke out the new brushes and acrylics, in hopes of achieving rich and brilliant color pushed to the point of surreal—just like I like it!

This painting is early in the process, not much more than an underpainting—so together we’ll see where this goes.

Posted by Artology Now at 2:14 PM No comments: