When ever we travel away from the things of man*, I take the means to make art. That’s because I love to paint outdoors. It combines the two things I love most: painting and Outside.

In preparing for our trips, sometimes I get a little carried away and my art bag weighs more than my clothing bag. I like to be well prepared for whatever art emergency that might occur (oh no, where’s my Holbein Manganese Blue!).

Well, now I’m up against a serious challenge. We’re planning a 4-day backpack trip and I want to bring art stuff—and I can’t just toss a big ole bag into the back seat of the car this time. 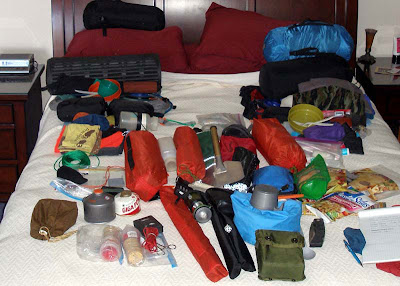 Over the weekend, we began to set out our gear, clothing, and food. Then, we started weighing everything—and I mean everything—from shirts to saline bottles—trying to figure out the lightest combination of essentials. I’m down to four items of clothing beyond what I'm wearing when we leave plus a jacket and a spare pair of socks. My entire beauty kit (and I use that term loosely) fits in a small baggy and weighs less than a pound.

We started out with 8 1/2 pounds of food—and that was after I had already eliminated the gourmet desserts I had visions of dazzling our camping comrades with. After further scrutiny, we took out a few more items and counted out the crackers into exact servings. I doubt I'll starve to death, although it seems to be a constant fear for me.

One luxury, I'm taking a little bourbon with me. There is nothing like a little whiskey by the campfire to warm you on a cool night. It’s something that goes way back with me—to my Yosemite days—when one magical summer night I sat around a campfire with a few cute cowboys and shared a flask of Jack Daniels—a dewy memory of comfortable companionship.

Clint just rolls his eyes at me and declares “the booze” WILL NOT be considered in the divided weight of our shared gear. “That’s all yours to carry,” he harrumphed at me. I told him that if we needed to liquor him up and give him a belt to bite on while we dug out a bullet (or a festerin’ mesquite thorn), he’d sure be glad I was carrying that whiskey. I got another eye roll.

After weighing and lessening quantities, and re-weighing and deciding what to do without, my pack is down to about 37 pounds—sans art tools. How do I squeeze in any art gear at this point without adding too much weight?

After some thought, I figured it out. I have a mini-pan of watercolors with a retractable brush. I found a small spiral-bound sketchpad and tore out all but a dozen sheets. I cut down some watercolor paper so it would fit inside the pad. My clever MacGyver husband replaced the spiral wire with a couple of plastic tie wraps (second to duct tape, undeniably the most valuable fix-it item in the world). My art kit weighs a mere 6.3 ounces.

Now, how do I offset that weight? Not with bourbon, that’s for sure. I tried to convince Clint that I don't need to carry my headlamp, but he wouldn't budge on that one. He's probably thinking I'll need that light if I have to perform surgery on him with my Swiss Army knife after dark. Maybe I can sneak something into his pack when he’s not looking…

* From "Joe vs. the Volcano" (one of our favorite movies)
Posted by Artology Now at 2:01 PM