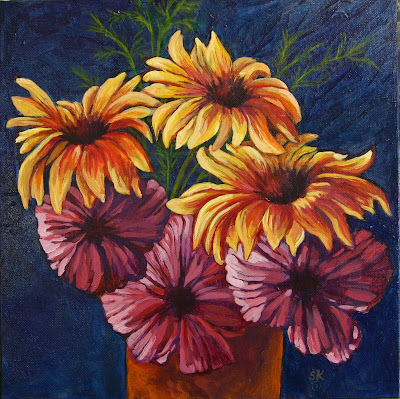 Fall Flowers
Acrylic on canvas
12" x 12"
After the most gorgeous spring ever (even with the June 24th frost that killed off half the garden), we had a long, dry summer with very little rain. Despite the challenges, we had several garden stars. Two surprises: the gaillardia and cosmos started from seed and lovingly transplanted just before the June frost that somehow survived. The cosmos struggled, yet suddenly shot up in late summer, and by September, towered over the rest of the garden at more than 6 feet tall. The gaillardia became huge and bloomed and bloomed and bloomed. The two were the highlight of the patio garden and were the last remaining signs of summer as the rest of the garden waned. It seemed they would go on forever.

I cut a few of each, and put them into a vase on the dining room table. They were spectacular in the morning sun. Then, I left for a week on a work trip. While I was gone, Jack Frost paid us a serious visit, and I returned to hunched-over stalks with withered blossoms. The vase on the table was still there with the last blooms of summer, which held on for another day or two before their petals dropped and their heads bowed to the coming winter.
Posted by Artology Now at 2:21 PM