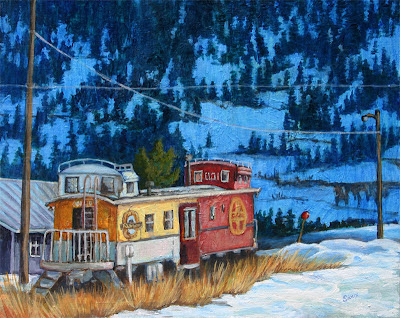 It was cold that morning, maybe in the low twenties. We scraped the ice off the windshield and headed toward Silverton on Highway 550. As the broad and open road climbed out of the valley where Durango sits, it became narrower—and icier. It was a great road, but the shady spots were slick with ice; we could hear the tires crackling across the surface. The snow blowing across the pavement leftover from the storm two days earlier seemed out of place in the bright sunshine.

The road got curvier, steeper, and more shaded as wound its way up to Coal and Molas passes, both over 10,000 feet in elevation. I couldn't believe how quickly we climbed. The view was spectacular: breathtaking mountains draped in snow. Soon, we were looking over the side into a deep crevice that held the creek was beside the road just a few minutes earlier.

We rounded a slight curve and came upon several Big Horn Sheep right in the middle of the road. We slowed to look at them and I rushed to get my camera out. The driver of a big rig behind us leaned on his horn—which might have been intended more for the stupid tourists than the sheep. Either way, it prompted the sheep to scamper off the road and up slope to our right.

Soon we came to the summit, where we could see a deep valley ringed by mountains. In the center sat Silverton, a handful of colorful confetti on a blanket of snow. The surrounding ridges framed the town with deep blue shadows.

It was 18 degrees. The streets were covered in a thick layer of ice. There were no other cars or people to be seen. It was 10 am, but none of the stores appeared to be open. The town was still and quiet—it looked abandoned. Steam rose off the rooftops of the weathered buildings that looked like something out of an old Wild West movie.

We found a building with signs of life (Lights! A car!). A sign proclaimed "Market" and "Coffee". Aha! Something that was open! The market had seen better days, though it was pretty well stocked. There was a big barrel of Piñon nuts, a sampling of produce, dusty canned goods, and of course, the last of the season's souvenirs. A hand-lettered piece of cardboard leaning on the register read: "This business for sale".

We left the store with our coffee and Piñon nuts, treading carefully over the ice back to the car. We drove around the deserted streets, (too cold and icy to walk!) taking in the charming old buildings and churches that remained from the boom days when Silverton was a thriving mining town. On the outskirts we found a colorful train car transformed into a summer cabin. The weeds had grown thick around it, the occupant long gone to some place warm for the winter.

We drove up out of Silverton, looking back at the tiny, empty town. The Big Horn Sheep were back in the middle of the road again. This time, no one behind us was in a hurry; so we stopped and let them slowly meander their way back off the road.
Posted by Artology Now at 7:08 PM

Email ThisBlogThis!Share to TwitterShare to FacebookShare to Pinterest
Labels: On the road