I Draw Everything But Flies 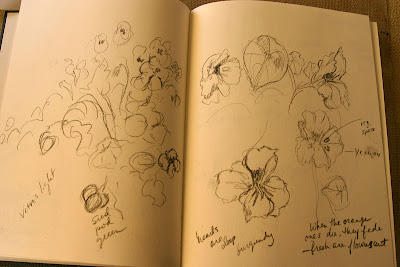 I think I first knew I wanted to be an artist when I was in second grade. When I finished coloring the cornucopia the teacher had mimeographed on the construction-paper cover of our Thanksgiving “What I'm Thankful For” booklet, I was quite impressed by my use of color and careful outlining of each component. It was so lovely, I wrote on the cover, just below the image: “For Sale”. I was thinking I could get about four bucks for it.

A few years later, when I was about 11, while working on my Animals in Pastel series, brightly colored cartoon-like images that flouted the conventions of realistic color, I declared to my parents that I was going to be an artist. My dad had a big grin on his face and said, “I have the perfect slogan to put on your signs.”

As soon as he said that, I knew it was going to be something embarrassing—or horrifying, or scary, or disgusting. I was an extremely sensitive child—overly so—I’m sure my family would say. My dad was an earthy, salty guy who came from the wrong side of the tracks as a kid. He didn’t pull any punches and called a spade a spade. Although I loved him dearly, he was a constant source of mortification for me. I never knew what he was going to say next—or to whom.

“I draw everything but flies,” he said, after a dramatic pause. Of course he was teasing, but I was beside myself. “Dad, I can't put that on my signs. That’s weird!”

The consummate salesman, he proceeded to outline the benefits of such a clever saying. I squirmed and murmured something acquiescent, but inside, I was not convinced, and determined that I would find a way to NOT show him my signs, which would NOT be tarnished by such a crude slogan. 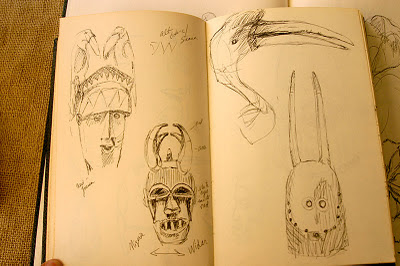 And so today, I do pretty much draw everything but flies (having grown up terrified that if I did not bathe frequently enough, that prophecy would come true). Although most of the works I’ve shared with you are paintings, often there is a great deal of drawing that goes on in the development of a piece.

Drawing is the way to figure things out, understand the shapes, the light, and relationship of the two to one another. Drawing helps me figure out my composition and often leads me to the medium I will choose. In the background as I sketch, I’m thinking about which method and medium will take me where I want to go. Do I want to push around acrylic paint to create texture, flow brilliant transparent color across a page, or scrape away ink from a plate to create a less refined image? 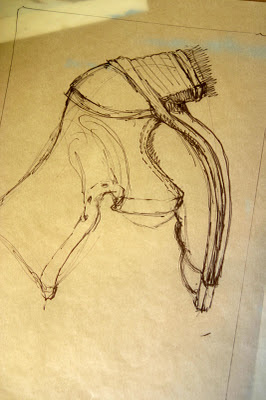 There are times when the drawing stage is very short. I know exactly where I want to go and with which medium. Other times, I'm drawing and re-drawing for a while until finally, I feel I'm ready to move to the next step. Occasionally, I get stuck mid-painting, and have to stop to do another drawing to work out the problem spot. 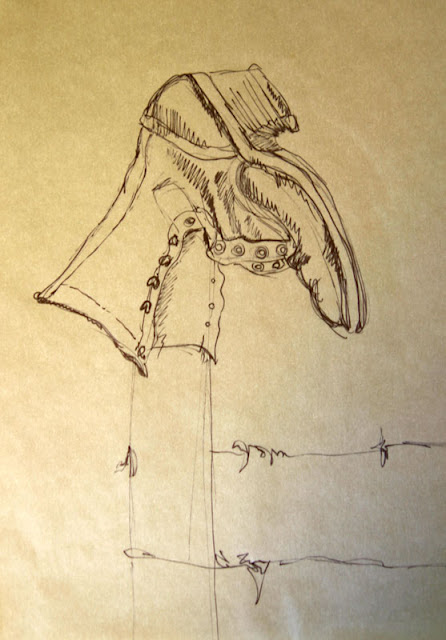 Here's my current study, a boot someone slipped over a post on a gate at a cemetery out in the middle of nowhere. It seemed like a funny place to leave a boot, that's for sure. Once upon a time it wasn't nowhere; it was the Kern County Seat. Now it’s just a wide place in the road, known as Havilah. It's in the mountains between Bakersfield and Tehachapi along a road that winds through classic California hills sprinkled with oaks.

I’m not sure where I’m going with this yet, but when I get there, I’ll share it with you.
Posted by Artology Now at 1:30 PM